Touching the Jagged Grain
Clarksdale and the Blues

“The blues…is an impulse to keep the painful details and episodes of a brutal experience alive in one’s aching consciousness, to finger its jagged grain, and to transcend it, not by the consolation of philosophy but by squeezing from it a near-tragic, near-comic lyricism.”
-Ralph Ellison

Every spring since 2013, I have driven the seventy-six miles from Memphis, Tennessee to Clarksdale, Mississippi to photograph the annual Juke Joint Festival. I drive south on Third Street past the businesses on the outskirts of Memphis, past the giant fiberglass statue of Big John that once marked the entrance to a grocery store and that now stands at the driveway of a giant fireworks superstore. Somewhere near the Mississippi state line the road changes names and becomes Highway 61. Highway 61 is America’s blues highway. It was the road along which the blues musicians from the Mississippi River Delta carried their music to Memphis and beyond. The land that gave birth to the blues, one of America’s indigenous musical forms, is the flat, fertile flood plain that stretches from the eastern shore of the Mississippi River to the hill country farther east. It is the land of cotton. It is also the land of slavery, sharecropping, lynching, and persistent, racialized poverty. It is the land of anguished suffering. Before we can celebrate the blues as a rich part of our cultural heritage, we need to linger here in the sweltering, sticky heat and dark dirt of the Delta where they were birthed. This was a land where white folk owned black folk, where white bodies flourished because black bodies suffered. It was a world where white happiness meant black pain, humiliation, and oppression. It was a world where white somebodies required black nobodies. It still is.

Before blues musicians ever performed to entertain, they performed to survive. Through their music, they became visible and insisted upon their full humanity. These blues musicians refused to be nobodies by performing themselves into somebodies. The Juke Joints that dotted the landscape of the Delta were sites for the reconstitution of black personhood and community. They were safe places for Friday and Saturday night celebrations where black folk gathered to sing themselves back together again in a world that daily worked to dismember
them. In the swaying, sweating, and singing of the Juke Joint, black bodies celebrated the goodness of blackness, body and soul. The blues are both lamentation and celebration. They give voice to the anguish of inexplicable suffering and the overwhelming despair that threaten to unravel black humanity. But at the same time, the blues reconstitute that humanity by affirming the goodness of blackness. The blues are about love and sexuality, intimacy and betrayal, desire and anguish, playfulness and pleasure, sensuality and laughter in the face of dehumanizing contradiction.

The blues are never sung. They are performed. The musician enlists not simply voice and instrument, but also facial expression, bodily gesture, interaction with the audience, and distinctive attire to complete the performance. Just as the blues are never merely sung, so they are never merely listened to by the audience. The audience participates in the performance. Together, musician and audience perform the blues and enact, even if only for the short duration of the performance, a new, authentic kind of human connectedness on the other side of domination. The blues offer no tidy philosophical explanation or theological solution to suffering. Instead, they confront suffering with bodily, poetic defiance that names it and then gently mocks it with lyric and humor soaked in life’s goodness. The blues thereby afford a victory over suffering and evil. It is a victory of the imagination, the most powerful kind of victory. But it is always only a partial victory, though even partial victories prove redemptive.

In my years of photographing the musicians and crowds at the Juke Joint Festival, I have come to see the work as my way of sharing in the performance of the blues. My hope is that like the blues themselves, these photographs celebrate somebodyness. 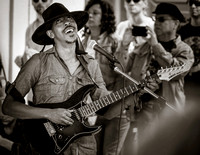 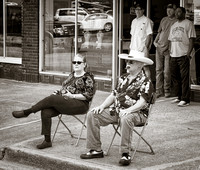 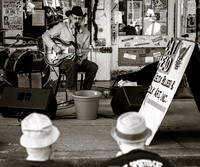