River Bones
The Mississippi River is many things. As it meanders through the heartland of America, it is a boundary separating states. But it is more the boundary. It is a thoroughfare of commerce, carrying an endless fleet of barges loaded with raw, industrial, and agricultural bounty to ports stretching from Minnesota to the Gulf of Mexico. Here in Memphis, if you sit alongside the River for more than a few minutes, you will see the giant barges pushing a football field's worth of materials past you, leaving behind an impressive, churning mix of mud and white water.

But the Mississippi River is also myth and metaphor. Huck Finn is every child of the River. Through him, Mark Twain explores who we are as Americans -- adventurers moving between civilization and wildness as we navigate the complexities of identity and race. But it's not just Twain exploring who we are. The River is the highway of American Jazz and Blues. The River's ever-changing shoreline, shifting currents, and swirling eddies are themselves an improvisation mirrored in the Jazz performances of the musicians who carried their music north and south along its banks. If Jazz was the jubilant celebration of the triumph of life, then the Blues were the music of the flood -- the flood of despair and protest borne along by a river complicit in the suffering of slavery and the calculated cruelty of Jim Crow.

As I began photographing driftwood along the Mississippi's eastern shore at the north end of Memphis, I discovered a fresh sense of the River as both geographic fact and cultural myth. As I walked slowly along the shifting rocks deposited on the shoreline to slow erosion, I found rich but shy deposits of driftwood. In the bright light under blue skies, the driftwood retreated into the camouflage of vines, leaves, and rocks; but on sullen, cloudy days, it reappeared to perform an interesting dance of tones, textures, and shapes. Much of it has been washed clean and smooth by its baptism in muddy waters. Some pieces bear the staccato shape of the Jazz musician's notes. Other pieces are overtaken by the vines and leaves much the way the suffering but resistant soul is overtaken by the Blues.

But metaphors are dangerous. They tempt us to relate to the River on mere human terms, measuring its meaning against the limited metric of our experience. In the end, the River is a brute and beautiful geographic fact. It is wildness, flow, and flood. It is unrepentantly muddy and unapologetically destructive. The driftwood strewn along its banks is the tracery of its wildness. The sun-bleached trunks, limbs, and sticks are the sublime poetry of unstoppable water.

The photographs that follow are of the small, the particular, and the ephemeral. But in these fragments of river bones, we find resonances of the beauty and majesty of the Big Muddy. 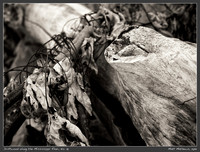 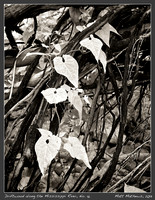 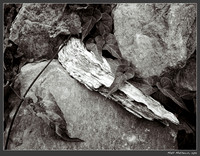 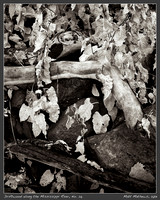 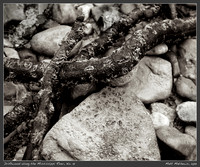