Every Wednesday evening during the spring and summer is Bikes on Beale. Hundreds of motorcyclist converge on Beale Street, Memphis’s most famous street. Motorcyclist come to eat, drink beer, and spend time with their friends talking motorcycles. But above all else, Bike Night is about performance and pageantry. From the colorful attire, exotic doo rags, studded leather, and worn denim to the glowing, colorful LED lights and chrome on the motorcycles, it’s all about being seen. And the tourists deliver too, flocking to Bikes on Beale to take in the spectacle of it all.

For a street photographer, Bikes on Beale is a dream come true. On many Wednesdays, I make my way down to Beale Street to photograph the gatherings. What I have come to realize is that most of the bikers are repeat customers who come down with their bike club or riding buddies and park in the same place along the street each week. Most then proceed to order a big, cheap beer at one of the bar windows that open onto the sidewalk. Then they just hang out, seeing and being seen.
Photographing Bikes on Beale is always a challenge. I have grown far less interested in the chrome and steel and far more interested in the bikers themselves. My photography has come to focus on gesture, deportment, and the way that the bikers encode identity onto their bodies through attire and grooming.

It’s also clear to me that motorcycles are an expensive hobby, and these bikers spare few expenses in saddling their iron horses. The bikers criss-cross socio-economic classes and race. Though in terms of race, the event is largely, though informally, segregated, with most African-American bikers converging on the east end of Beale Street while most white bikers gather on the west end. These boundaries are somewhat permeable, however; personal friendships require such permeability, but the general pattern of informal segregation holds. There are women bikers and passengers as well. But curiously, despite the rebel image cultivated by the bikers, both men and women in bike culture conform quite closely to traditional, stencil-drawn gender roles. The valorization of rebellion only goes so far; in fact, it turns out to conform quite closely to conventional American mythologies and cultural tropes.

Alongside the bikers and tourists is another group, “the regulars” as I call them. These are local non-biker folks who just show up each week to take it all in. I suppose I’m one of them now. Over time, they too come to be part of the spectacle. It is not uncommon to see some of them dancing to live music in Handy Park at the east end. There are also street artists, evangelists, and Shriners selling raffle tickets to raise money for the children’s hospital. The lucky winner of the raffle will take home a new motorcycle at the end of the season. I haven’t bought a ticket yet. There are also folks from the margins who come to ask for money, though they must do it discreetly as panhandling is generally not permitted on Beale Street.

So, that’s the story of this collection of photographs. Enjoy your walk down Beale Street. 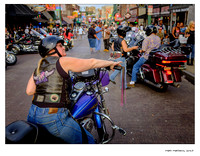 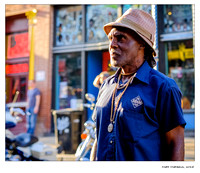 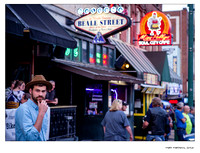