The soil of northern New Mexican mesas is red. Local peoples gathered up this red earth in their hands and shaped it into adobe bricks to make their homes and churches. This red earth, watched over by large moons and tilting gravestones, yields beans and chile peppers that remain the staple of the distinctive food culture that flourishes among the local Spanish-speaking people.

The soil of the Mississippi River Delta is dark and coffee brown. In this rich, tilled soil grow cotton and more recently soybeans. Out of this same dark, plowed soil grew slavery, sharecropping, and suffering for African-Americans. This soil also produced the Blues of the juke joints and the Spirituals of the black churches that dot the flat, tilled terrain. In the muddy waters of the Delta, crawfish still scuttle and catfish grow big.

The soil of the California ranch lands is tan. This rolling land in the foothills of the Sierra Nevadas and Pacific Coastal Range is rocky and uncultivated. In the rainy season it is deep green with wild grasses, but in the dry season the grasses turn parched and golden, ready fuel for wildfires. The ranchers learned that this tan soil was not easily turned for crops. Better to graze cattle and plant some hardy trees or set out beehives to be flavored by the wild sage bushes.

Every kind of soil produces its own local, vernacular culture. Entire ways of life grow up in close relationship with the limitations and possibilities of the land. There is a richness in these local cultures, each expressing in its own idiom and accent an American way of life.

The photographs that I have included in this collection celebrate elements of these vernacular cultures of rural America. They focus on the local and common ways that ordinary people interact with and are shaped by the land in which they live. These images point away from the mass production, commercialization, and the cultural homogenization of so much modern life. There are no two identical adobe churches in New Mexico. There is only one white clapboard church in Leflore County, Mississippi with a pew and hymn board on its porch. The one-of-a-kind, hand-painted menu featuring local New Mexican cuisine finds a curious counterpart in the the crawfish and produce signs along the Blues Highway outside Tunica, Mississippi. A simple arrangement of plants on a New Mexican porch, a white picket fence bounding a lone ranch house along the California coast, and a Florida farmhouse hemmed in by live oaks and Spanish moss are not repeated in the cookie-cutter subdivisions stamped out by modern developers.

The photographs are about what is threatened by the silent march of modern life with its unquestioned commitment to commercialization, mass production, and cultural homogenization. They are an invitation to consider afresh the importance of the particular, the local, and the unique ways of life carried in our vernacular cultures. For such is what lends to our lives richness, texture, and meaning. 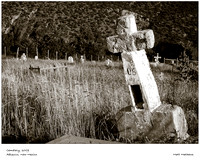 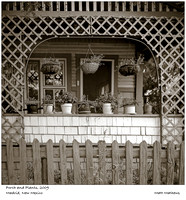 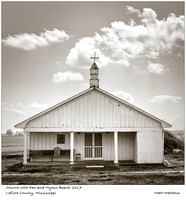 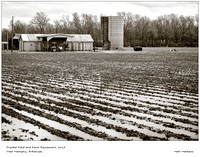